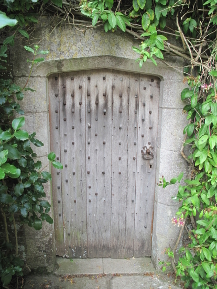 At the time of the Domesday Book, Anderson Manor was held by William de Schohles (Stokes) and then by the Turberville family.  In 1450 it was bought by the Moreton family who started to build the present manor house in 1613 but then sold it to John Tregonwell of Milton Abbas.  He completed it in 1622 and, on his death, the estates were divided between his two sons with the younger, Thomas, inheriting Anderson.

In 1761, Anderson Manor became a tenanted farm until the Tregonwell family finally relinquished ownership in 1902.  By this time the house was in some disrepair and was sympathetically restored between 1902 and 1913 by Mrs Gordon Greatrix, who also laid out the formal gardens you see today.

The parish church of St Michael dates back to mediaeval times.  In 1889, having fallen into disrepair, it was largely rebuilt, closely modelled on the plan and elevation of its predecessor. The south chapel was added in 1755.

In 1972 the church was declared redundant and is now owned and cared for by us as part of the estate.  Funds raised by opening the gardens are being used to help restore and maintain this lovely Dorset church.  So far, we have raised over £2,000, which has been used to help repair the porch and roof.

During World War II, Anderson Manor was host to one of the more remarkable military units of the Second World War.  In March 1942 it was selected as the operational base and training centre for the Small Scale Raiding Force (SSRF) – 62 Commando.  This Special Operations Executive sponsored unit specialised in night time raids across the Channel to snatch prisoners for interrogation, to reconnoitre enemy installations and, on one occasion, to capture and bring back to England the entire German crew of the Casquets lighthouse on Guernsey.

The 55 members of the SSRF lived and trained at Anderson. A pistol and tommy-gun range was set up in the walled garden and there was a grenade range in a pit to the north. An assault course was built amongst the trees on the drive and across the river. The cherub, who used to adorn a fountain in the front courtyard, was an obvious target for pistols, crossbows and other weapons and as a result suffered almost complete destruction. Only his head survives and has been incorporated into one of the garden walls!

A brass plaque commemorating 62 Commando was blessed during a special service in 1988 attended by the last remaining squadron members.